Godwin and the Chancellor, part 1

I have returned! Today we will begin a relatively lengthy bit of dialogue between two characters. We don't know their names yet at this point, but in English they are later referred to as Godwin and “the chancellor” so I'll call them that until I encounter their 日本語 names.

As a reminder, モニカ is listening to 声 (one or more voices) from the 玉座の間. We, the player, now both see and hear the dialogue that she's listening to. 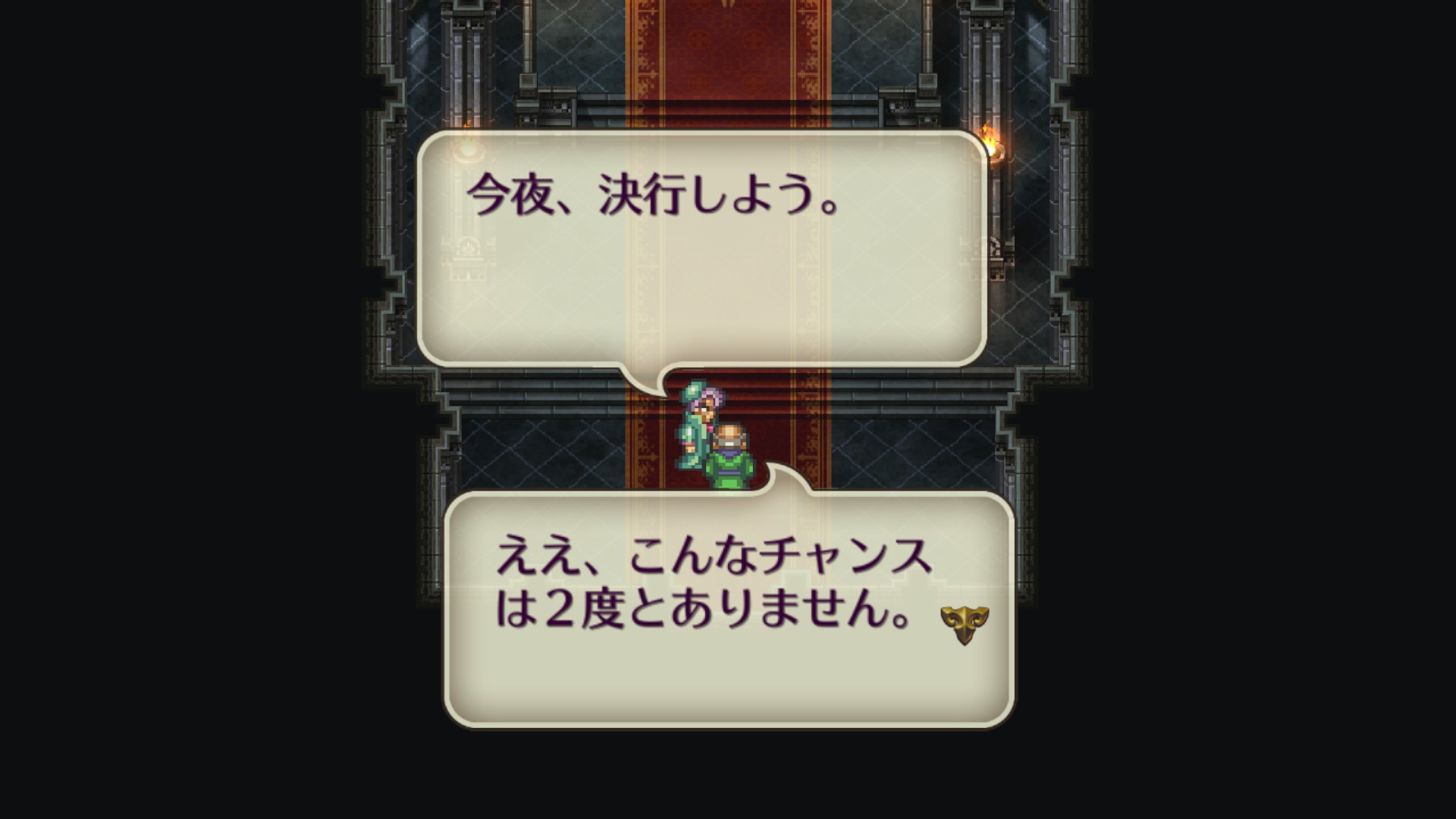 That should be a good amount of work for today at least!

今夜、決行しよう。 今夜(こんや): tonight, or this evening. 決行: carrying out, doing. しよう: need to figure this out via verb conjugation. Godwin is saying something will be done this evening.

ミカエルはわずかな兵と出陣している。 わずか: a few, a little. Can be written as 僅か, with identical pronunciation. 兵(へい): another word for soldier. We already learned 武人, which also means soldier, when we chose our 宿星 earlier. 出陣(しゅつじん)している: this is a conjugated form of the verb 出陣する, which means to go into battle. 陣 can mean “camp” or “battle array”. 出 is taught very early on WaniKani, so you probably know it means “exit”. The conjugation indicates that the verb is an action that is ongoing. Mikhail-topic, a few-adjective soldiers-and, presently going into battle. Mikhail is going into battle with a few soldiers.

このロアーヌの町を押さえてしまえば、 この: this introduces a new 日本語 concept to me, the “determiner”. It attaches directly to a noun – see this site for a useful breakdown. If you know Esperanto, この functions very much like “tiu”, instead of “tio” or “これ” which is a pronoun that stands by itself. English would use “this” in both instances. 町(まち): village. 押(お)さえてしまえば: connective form of the verb 押さえる, which means to pin down or hold down. The てしまえば part seems to mean “once you (do the verb)”. Once we hold down this village ロアーヌ, ...

ミカエルも手の打ち様がない。 手(て)の打(う)ち様(さま/よう)がない: this one's giving me a hard time. 手 is hand, 打 is hit, and 様 is “like” or “similar to”. The phrase can be found several places by searching for it, but it's hard for me to parse it out. Machine translation gives me a few possibilities, that the entire phrase means “be helpless” or “beyond one's control”. Mikhail also will be helpless.

That concludes the first three screens' worth of dialogue for this scene! There's about 3-5 more screens to go.